The people who fulfil the pledge made with Allah and do not break their promises.
And they are such that they keep joined that what Allah has commanded to be joined (the relationships), and fear their Rabb, and are afraid of an evil reckoning.
13:20-21

The literal meaning of the word ‘Iqrar’ is to be in concurrence, to make a pledge or a vow, and to promise. The categorization of mankind into groups is generally based upon race and ancestry, ideology, or along political and nationalistic lines. Allah-swt however, has divided mankind into two groups with reference to the ‘Day of A’last’*; one group that held ever fast to the promise they made on that first day, of Allah being their Rabb, and the other that abandoned that promise.
(As our right as) Muslims, the pledge of ‘A’last’ is repeated in our ears in the form of  Adhan (the call to prayer) upon birth; through it we hear the declaration of Allah-swt’s greatness and that of the Holy Messenger’s Prophethood (saaws). Then we repeat it once again when we are older in the form of Kalima Tayi’yiba (the pure word).
This pledge, this agreement or the promise that we made to  Allah-swt binds us to Him in a bond that is ever enduring, and closer and truer than any other relationship; it is the bond of the Creater and the created, of the slave and his Master; nurturing it is the only true virtue; if this bond is strong it serves to guide men upon the path of success in the life hereafter. Hence, Allah-swt has declared those who strive to strengthen this bond, to be the ‘Men of Intellect’(2:179). Hence, the very basis of sagacity and wisdom is to be ever intent upon achieving success in the life hereafter.
The blessings of this association and relationship with Allah-swt link us to another beautiful relationship; the one that exists between the Prophet-saaws and His followers. This relationship is such that it reinforces the soundness of our commitment to Allah-swt, too; it refreshes the memory of (the pledge of) A’last and strengthens the connection between faith and deed. It restrains us within the bounds of desire and prudence (Sabr) and in so doing, fosters respect in all our relationships, including those with kin and loved ones. Thus, these (blessings) not only effect the human being at a personal level by elevating him to (the status of) the ‘Men of Intellect’, but raise him to such height that the virtue of his deeds effects all that surrounds him to the extent where a bird’s nest is safe in the midst of a jungle and no herd of goats belonging to one shepherd dare wander into another’s field to graze.  Honourable readers! such is the influence of the ardour of our close commitment to Allah-swt upon the world around us; consider then, the power it would have to bestow upon us the success in the life hereafter which carries with it the glad tidings of Allah-swt’s supreme favour and beneficence.
However!
It all depends upon the pledge we made as we acknowledged the illustriousness of His Rabbubi’yat (Mastery); that is the need, indeed.
Silsila Naqshbandia Owaisiah, Naqshbandiah Owaisia, Tasawuf, Sufi meditation, Rohani tarbiyat, Shaikh, Ziker Qalbi Khafi 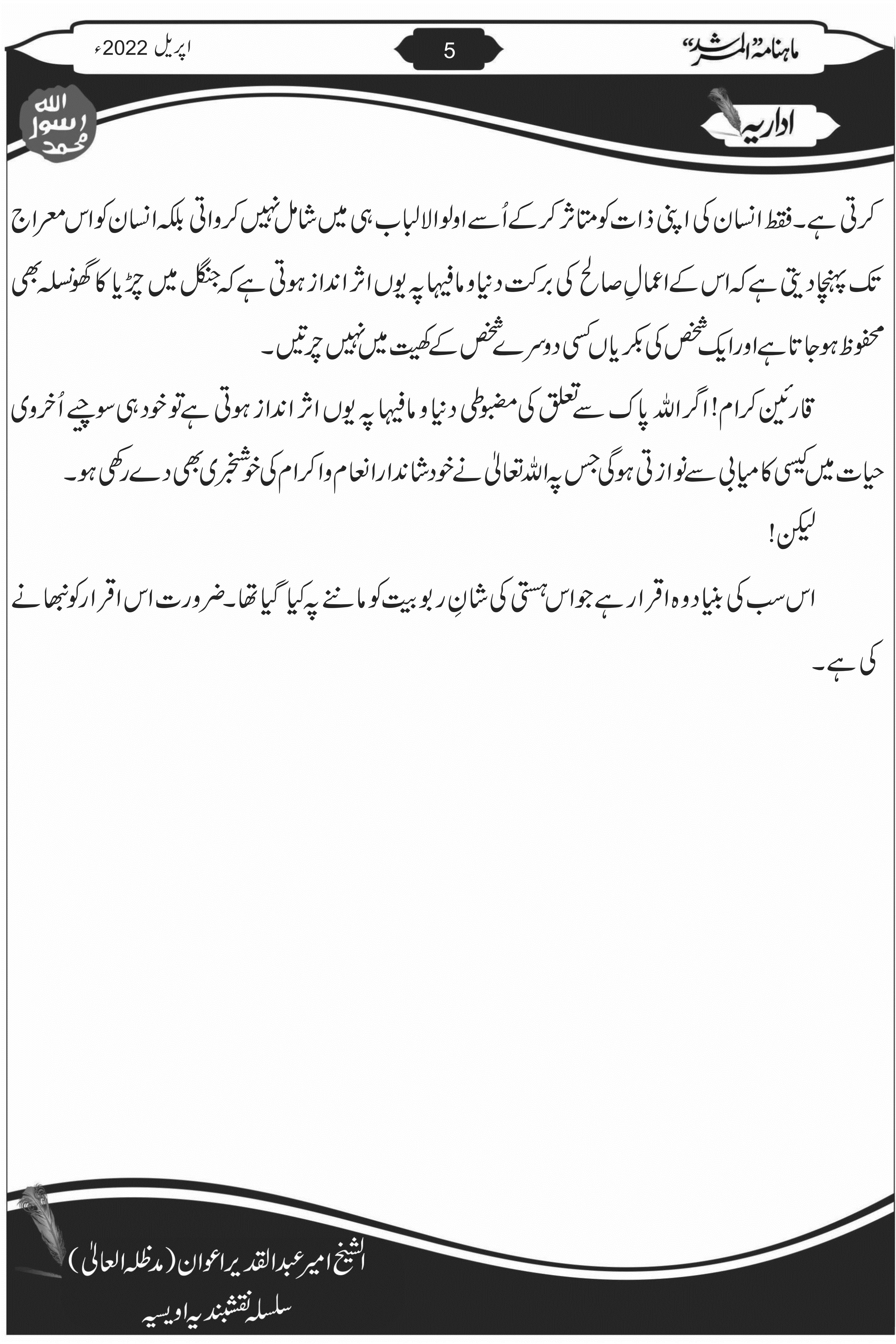