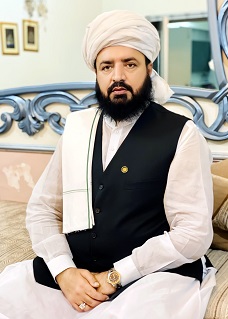 The son and the most illustrious student of His Eminence Hadhrat Ameer Muhammad Akram Awan-rua, one of the exceptionally distinguished Sufi Masha’ikh of our times, Hadhrat Abdul Qadeer Awan spent 44 years in his exalted father’s company from whom he directly acquired religious knowledge and received spiritual training, and who transformed him into an accomplished Sufi and nominated him as the Successor-Shaikh of the Silsilah Naqshbandiah Owaisiah.

In an Owaisiah Silsilah, physical presence of a Salik (seeker) before his Shaikh is not essentially required for transfer of Faidh (spiritual beneficence). He receives the blessings of his Shaikh in the same manner in which Hadhrat Owais Qarni-rua had received the Prophetic blessings without ever meeting the Holy Prophet-saws.

The Naqshbandiah Owaisiah Silsilah is distinct for initiating a seeker directly onto Zikr-e Qalbi (Zikr within the heart). A unique distinction of this Silsilah is that, after illuminating the Lata’if of the seeker and conducting him to the various stages of the Path, the Shaikh finally conducts him to the Court of the Holy Prophet-saws for a Spiritual Bai’at. The seeker can attain the highest stations of the Sufi Path, according to his capacity and effort, under his Shaikh’s Tawajjuh (Attention) and guidance.

Hadhrat Ameer Abdul Qadeer Awan delivers daily lectures during the forty-day spiritual retreat, the Annual Ijtema, held every summer at Dar ul Irfan, the Markaz of the Silsilah, which is attended by the Ahbab from all over the world. The primary focus of these lectures is the spiritual education of the students, but they also cover a wide range of other topics related to the Deen. Similarly the ten-day I’tikaf Ijtema at the end of Ramadhan, the monthly Ijtema and his weekly Friday sermons are a source of immense spiritual knowledge that guides the seekers in their spiritual education and progress.

Hadhrat Ameer Abdul Qadeer Awan is the Dean of the Siqarah Academy. This Academy employs a system of education that integrates both religious and standard academic syllabi thereby enabling its students to not only excel at the academic level but to also become exemplary and enlightened Muslims. He holds the distinction of being among its first students.

As the Patron of the Al-Falah Foundation he oversees the provision of humanitarian support to people in the rural, urban and disaster-affected areas of Pakistan.

Since 2010 Ameer Abdul Qadeer Awan has been undertaking international tours to carry forward the mission of Tazkiyah-e-Nafs (purification of one’s inner self) assigned to him by his beloved father and illustrious Shaikh. His annual itinerary includes frequent travels abroad to Europe, America and the Middle East, as well as local travels within Pakistan. He reaches out to his students continuously to guide them in their quest for spiritual awareness and conducts Zikr sessions over the Internet every day. He responds to the Seeker’s queries through email and is also available to those who come to visit him daily at his office.

Along with his busy schedule, he retains ties to his writing commitments. He is the Patron and the Editor–in chief of the monthly journal ‘Almurshid’ and authors its monthly editorial.

Hadhrat Ameer Abdul Qadeer Awan’s mission is to further the cause of True Deen and to instil truth, sincerity and loyalty in one’s relationship with Allah-swt and His Holy Prophet-saws. He confers special attention to character building of the youth. Following in the footsteps of his honourable father and beloved Shaikh, Hadhrat Ameer Abdul Qadeer Awan is making a definite and positive contribution for the betterment of the society as a whole.