The word ‘khandaq’ (trench) is derived from the Persian word ‘Kandah’, which means dug out. It was
Ziqad 5 Hijri, when the tribe Banu Nazir was exiled because of breaking the treaty of Meesaq-e-
Madinah. The leaders of this tribe, like Hayee-Bin-Aqtab and Salam-Bin-Abi Al Haqiq etc. with extreme
anger, leaving aside the Quresh of Makkah, visited all other tribes and ignited such a fire in the entire
country bringing all of them together against Islam. When Hazrat Muhammad (SalAllahu Alaihi
Wassalam) heard about the collecting of an army of ten thousand soldiers, coming to attack Madinah
Munawarrah, he called a meeting of the Companions (Raziallah anhu) for their suggestions. Hazrat
Salman Farsy belonged to Persia and knew about the method of using trenches in warfare. On seeing
the vastness of the enemy force he suggested that they should collect in a safe place and dig a trench for
safety between themselves and the enemy. Thus teams of ten people each, were given forty yards
stretch to dig. Winter nights, severity of weather and starvation stretching up to three days, exposed
many a hypocrite. Anyway, three thousand honourable hands completed the work in the given time.
These included from fifteen year olds to the elderly. Such was the state of starvation that the
Companions (RaziAllah Anhu) had tied stones to their stomachs. The Prophet (SalAalhu Alahi Wassalam)
worked with the Companions in such a state that he had two stones tied to his abdomen. The cliff that
was unbreakable by the Companions, was broken in three strokes by the Prophet (SalAllahu Alaihi
Wassalam). At every strike a bolt of lightning was seen and this was the time that the Muslims were
given the prophecies about their victories over Syria, Persia and Yemen.
when the infidel’s army reached Madina Munnavera they were astonished at seeing the trench.
No animal could jump across its width and if any rider would attempt to ride down the trench he could
get killed by arrows of the marksmen. By mistake a portion of the trench was left narrow. Umrow-bin-
Abdood, who thought of himself equivalent to a thousand combatants, crossed the trench from this
area, where Hazrat  Ali RAU killed him. This siege went on for nearly a month and then help came for the
Muslims from The Almighty Allah that the infidels had to bite the bullet and absolutely panic stricken the
had to retreat. In Surah Ahzaab it is mentioned so:

Respected readers! History of Islam is witness that whenever Muslims with utmost faith and for the
progression of Islam, they stood against the enemy, 313 were victorious over 1000, 3000 over 10000
and a few thousands defeated lacs. 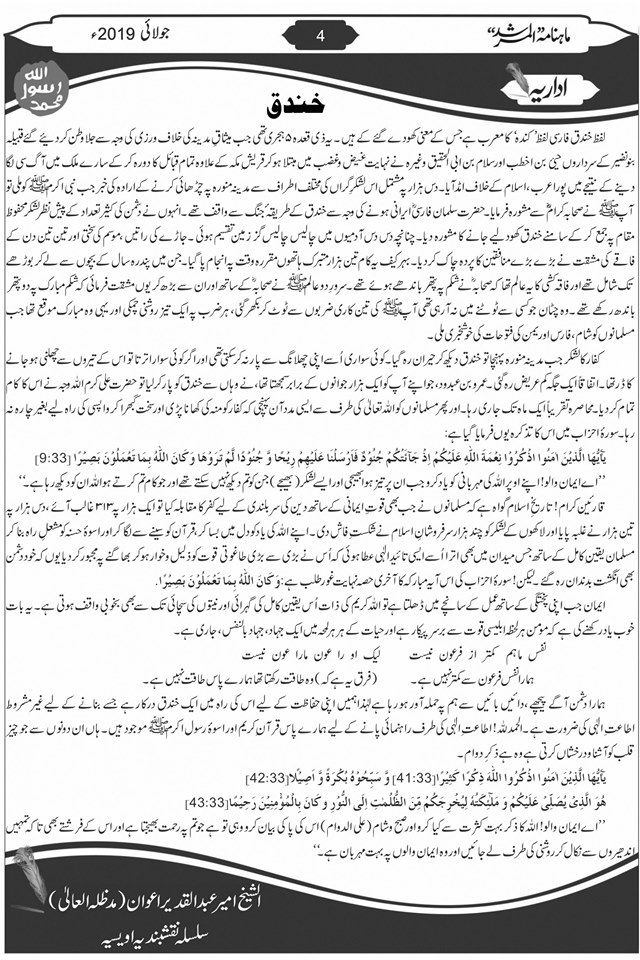