In the Urdu dictionary, the word ‘eesaar’ (ایثار) means to consider the benefit of others above your own; to
give priority to the interest of others over one’s own benefits i.e. for the gain or happiness of others, to turn
your back towards your own needs or desires, is considered self-sacrifice. If this ‘other’ is a person thereupon
usually one expects, if nothing else, at least appreciation for his noble act.
It is this ‘ایثار’ (self-sacrifice) that is realized in its actuality, when it is in connection with the Creator;
accordingly the self-sacrificing individual thus attains the heights of human excellence. Hence, such honour is
bestowed upon him that even the residents of the higher Realms would be envious. When the objective is
solely to please Allah, desiring only His Cognizance, then for him even his own physical being becomes
valueless. Love of his relations, worldly attractions, physical comforts, and the spirit to live; nevertheless, no
infatuation shackles him. Likewise, the interesting thing is that the one who self-sacrifices, even after giving
away everything of value, is not left a destitute.
When for the Almighty Creator, the great fire lit by Nimrod is no hurdle, accordingly on the other hand this
command overflowing with love is decreed.

We commanded (the fire), ‘O fire! Be cool and be (a source of) peace for Ibraheem (Alaihi as-Salam).’
Al-Quran Surah Al-Anbiya [21:69]
The desire for the attainment of the appreciation of the Almighty Creator, surpasses the love of one’s
offspring such that he thus puts a blade to his child’s throat. It is here that ‘Al-wadood’ (the One who loves
beyond exaggeration), thereupon replaced from under the knife, the son with a sheep; hence declares this a
ritual of sacrifice, to be followed by all, until doomsday. That accordingly, out of His limitless love, this attempt
of sacrificing ones most precious thing, ones extremely beloved son, is thus remembered until the end of
times. This is the same son, who by Allah’s Command, in his infancy was left with his mother in this vast
dessert. Likewise, that Lady with utmost faith had asserted, “If our Creator so Commands, He will not let us go
to waste”. Thereupon, this epitome of love and self-sacrifice, had to run up and down between the mountains
of Safa and Marva, for the sake of her child. Accordingly, the skies beheld that this voluntary act of hers, was
declared a part of the Haj rituals till Doomsday.
Respected readers! Can we find any tribute more exalted than this to selflessness and sacrifice!
Alternatively, there is another aspect to this that the One who bequeathed, at His very Command that which
was given is sacrificed for Him; consequently, how could this be considered an act of selflessness or sacrifice!

جان دی، دی ہوئی اسی کی تھی حق تو یہ ہے کہ حق ادا نہ ہوا
I sacrificed this life for Allah, the One Who had granted it (to begin with),
However, the fact is that even still I could not repay its due in full

However, He is Benevolent such that based on a person’s deep desire, likewise, only and solely the craving for
attaining His appreciation; He bestows it, with the honour of acceptance such that on everything, which He
has given i.e. wealth, life, knowledge, mental and physical abilities, alas! Be it anything at all, when sacrificed
for Him, even if it is the mere abidance of His ordained Commands; He Declares it as a debt of the person,
upon Himself.

Who is it that will give a loan to Allah, in a meritorious manner?...

Moreover, observe the Excellence of His Mercy:

That Most Loving (Allah) is so Magnanimous that He keeps in His consideration each and every desire
sacrificed for His sake. As though granting every True-Believer, in every moment of his life, an opportunity of
self-sacrifice for His sake. Accordingly, now it is up to us that how much of the will to sacrifice, the temporary
pleasures for the eternal bliss, do we manage to awaken within us. 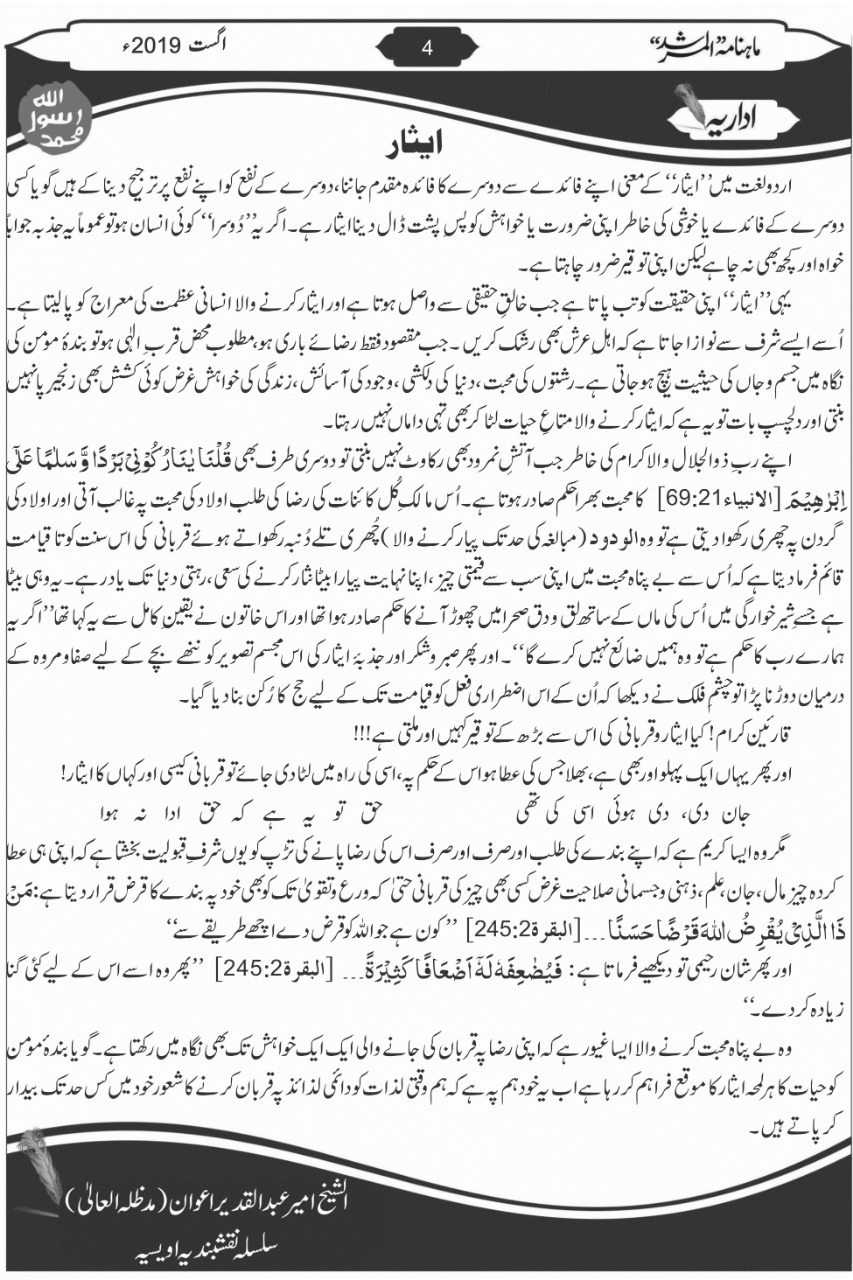