It is the law of nature that results are dependent on one’s deeds. Whether it is a matter of an individual or collective
group, without changing the actions, to harbour expectations of altering the results is futile. After planting a Kikar tree if
one expects to grow mangoes, is unheard of. Likewise, roses never grow on a Babool bush.
Every deed of a human being is a seed. Whatever type of seed one sows the same fruit shall he reap, however, the point
one must bear in mind is that the seed does not grow into a tree immediately after being sowed, it takes generations to
nurture it, then only do the coming generations reap the fruits.
When Islam emerged in this world, thereupon in its foundations instead of bricks and clay, the blood and bodies of the
Sahaba (رضی اللہ عنہ), came to use. The blood running in the veins of the Taabaeen, Taba Taabaeen, blessed Sufis,
honourable Aulia, learned Scholars and Mujahids was expended, to nurture it further. At places, the cry for help became
the cause of a new dawn, whereas at others the slogan of justice echoed in all quarters of the world arising new hope.
Somewhere, the night-time prayers came to effect, while at other places the daytime struggles. In regions, the burning
of the boats at the seashore, while at others the sky witnessed the horses driven across rivers were thereby cause of
Islam’s expanse. Albeit! The warzones or gardens-of-life, everywhere, at every place, every moment was filled with
bravery, honesty, justice and equality; thus, subsequently this light emitting from the Arabian-Desert enlightened every
corner of the world.
At that time the Muslim nation was the voice of the downtrodden. In any part of the world, no matter where, when
there was a cry for help, they would be the source of healing for their wounds. In yesteryears, the ones responsible for
eradicating oppression have themselves become oppressed. Anywhere, from any corner, if there is a cry that escapes or
expels, it is that of a Muslim. Is it not a point to ponder that why is this so? Why is the Muslim being dishonoured? Why
is the scope of life narrowing for him?
It is such because from falsehood, hypocrisy, mistrust and indifference to the slaying and murder, cruelty and terrorism,
the tree that is bearing these fruits, its roots consist of debauchery and cowardice as its seed is the distancing and
disassociation from the Deen. The seeds that we planted at a national and collective level, have now become full-grown
trees.

We lost the legacy that was bestowed from our ancestors,
From the zenith (stars) of the heavens, we were made to plummet down

Those people who violate the solemn promise avowed to Allah, thereafter it; conversely splitting that which Allah has commanded to

unite, thereby corrupting the earth; these people are to suffer loss.

… Certainly, Allah does not change the condition of any nation until they themselves change their state…

Moreover, we are such that after reading and viewing the news about the mountains of devastating oppression
collapsing over the Kashmiris; we are forwarding messages to one another to recite this surat or that aayat, so that in a 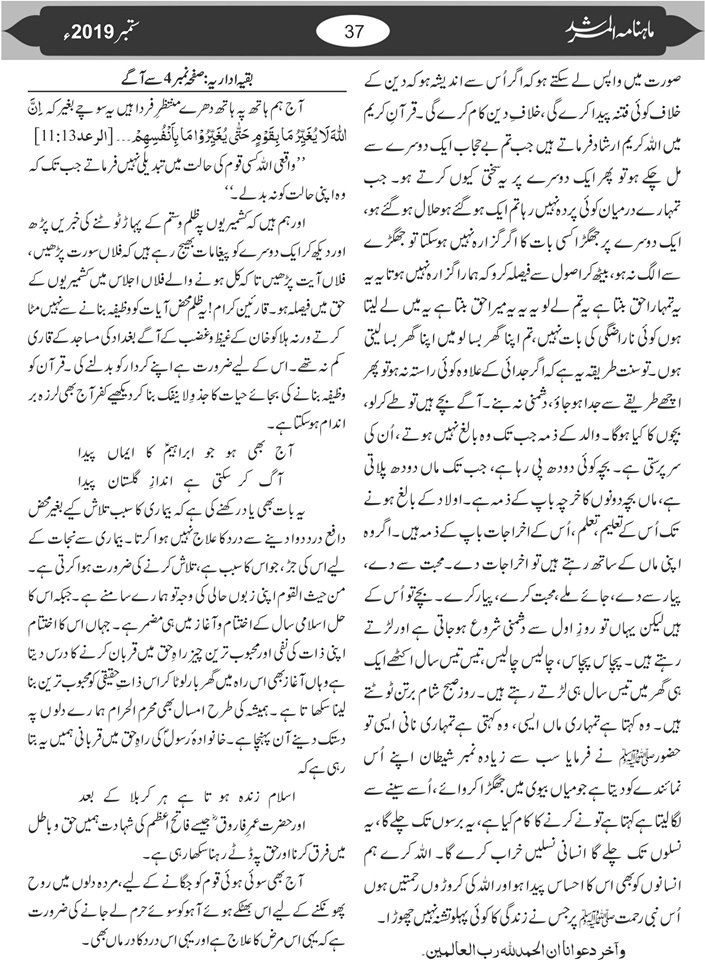