Essentially, those who obey Allah and the Messenger will be (on the Day of Qiyamah) with the people whom Allah has (greatly)
blessed, (like) with the Prophets and the Truthful and the Martyrs and the Righteous; likewise, excellent are these companions!

The Deen-e-Haq (Islam) starting from the basic beliefs to its I’badaat (worship done with absolute
devotion to Allah), from the apparent to the intrinsic aspects, reached us through a continuous and
successive system; the source and the starting link of this chain is the Being and person of the exalted
Holy Prophet ﷺ. To spread the Refulgence, of this never-ending beacon of light, to all corners of the
world, after the Prophets (عليه السلام), the Siddiqeen (The most Truthful), Martyrs and Sualeheen (The
most Righteous) transformed their temporary existence into an eternal reality. While, in order to preach
the apparent aspects of Islam, lives were spent, similarly every breath was utilised simultaneously in the
pursuit of the field of the internal state-of-being, as well. Those Blessings and Refulgence, which are
emitting from the subtle-heart of our Holy Prophet ﷺ, were transferred from heart to heart;
accordingly, honourable and respectable are those bosoms, which became the trustees of these.
The Refulgence, the source of which is the subtle-heart of our Holy Prophet ﷺ, the prerequisite for
the attainment of these by us, is the same as was that of acquiring them directly from the Qalb-e-Athar
(Blessed Bossom of the Prophet ﷺ) by the Sahaba (رضی اللہ تعالٰی عنہ). It is not possible that the rules
approved by Allah (سبحانہ وتعالی) and those lines taught by the Holy Prophet ﷺ, that one is able to
receive any benefit otherwise. During the lifetime of our Holy Prophet ﷺ, the amount anyone
remained in the blessed presence of the Holy Prophet, accordingly they received a similarly honourable
status. The honourable personality to have been blessed with such a height of the love of the Prophet
ﷺ and strength of Faith, that although having to return due to an immense necessity. Accordingly,
remaining deprived of setting eyes on the blessed Prophet ﷺ, yet even a few moments of his being
spent in the Masjid-e-Nabwi, earned him the honour that the Holy Prophet ﷺ himself stated “I can
smell the fragrance of faith from this corner”. Without doubt, despite being extremely fortunate,
nevertheless, his name does not come in the list of the Sahaba (رضی اللہ تعالٰی عنہ). This is the excellence
of attaining the blessed companionship of the Holy Prophet ﷺ, and this remains the prerequisite to
receiving the blessed Refulgence even today.
Here, it is essential to understand the connotation of the company of an exalted Sheikh. Commonly, ‘in
the company of’ means to be with someone, whereas in the vocabulary of ‘Tasawwuf’ it means
accessibility (to an exalted Sheikh) for the purpose of the attainment of the blessed Refulgence.
It is the blessings of the essence of Companionship, which were received by Hazrat Abubakar Siddique
(رضی اللہ تعالٰی عنہ) that granted him the status of Siddique-e-Akbar (The most Truthful). Moreover, it is
this honour of the blessed Companionship of the Prophet ﷺ that Hazrat Omar Farooq the great (رضی
اللہ تعالٰی عنہ), whose own righteous deeds were like the star-filled skies, yet wanted to exchange them
with the blessings of the one night of the cave of Saur. Those exalted persons who are mentioned in the
Quran by Allah the Benevolent Himself, as “excellent are these companions”; meaning that when the
companionship of the Leader of the Prophets ﷺ is attained, whereupon the heights of honourability
and nearness to Allah that it leads to, is extremely difficult to perceive.

Meaning good deeds are not just based upon the act itself, but is dependent upon the intention behind
the deed. Accordingly, the reward is awarded on the sincerity behind the intentions, the more the
intensity of the sincerity the more earnest the intention will be. Intentions and sincerity are feelings, and
in order to attain these, it is essential to attain the blessed Refulgence, which without a doubt are
dependent upon the companionship of an exalted Sheikh.
Hazrat Obaid-ullah Ahrar mentions, “the best deed is the obedience of the commands of an exalted
Sheikh, moreover, his company gives the disciple the ability to attain the awareness of being in the
Presence of Allah (سبحانہ وتعالی)”, meaning that the effect of the company of an exalted Sheikh is that
the heart attains the exclusive love of Allah (سبحانہ وتعالی).
Hazrat Abubakar Varaaq (رحمۃ اللہ علیہ) writes in the narrative of the Ashab-e-Kahaf, that “being in the
company of the righteous (the companionship) and serving them is an endowment, irrespective of
gender”.
Hazrat Qasim-e-fayuzaat (رحمۃ اللہ علیہ) mentions in his book Sharah Masail-e-Salook that “receiving
even a few moments in the company of an exalted Sheikh, can grant one the blessings that cannot be
achieved through one’s personal efforts of even hundreds of years”.
The result of I’badaat and positive endeavours is the attainment of the closeness of Allah (سبحانہ وتعالی);
accordingly, this cognizance in unattainable without receiving the Refulgence from the Holy Prophet
ﷺ. These Refulgence are transmitted from heart to heart, thereby reaching us through our Sheikh.
There is neither any other source nor method of the attainment of these nor can they be attained on
our own. “Bear in mind, whatever a person receives through this blessed companionship; the ability to
absorb these reflections cannot develop through any other means.” (kamalat-e-Ashrafia). That is why
the Aulia Ikraam gave top priority of the companionship of the Sheikh, first and foremost. 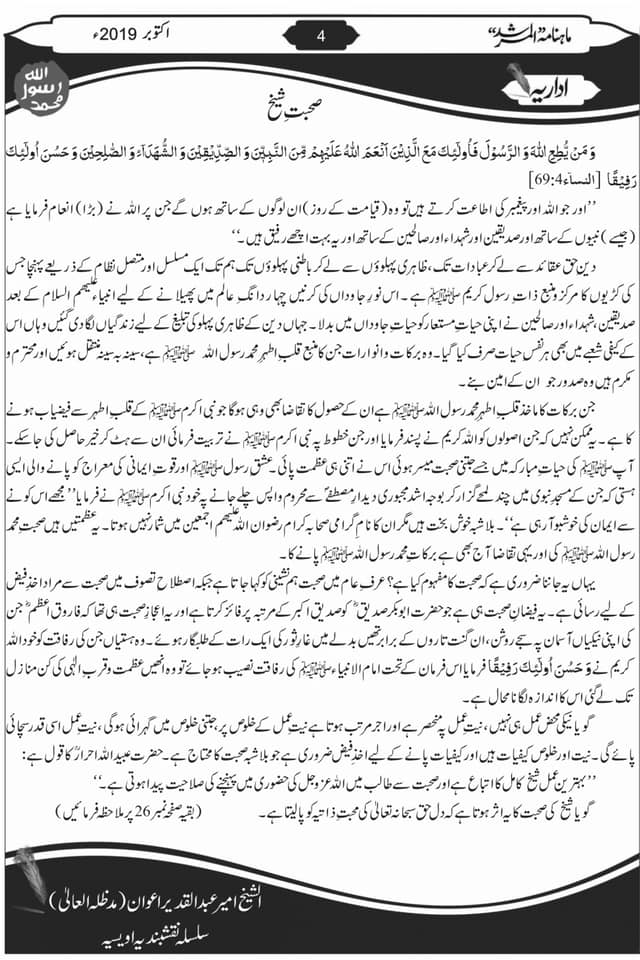 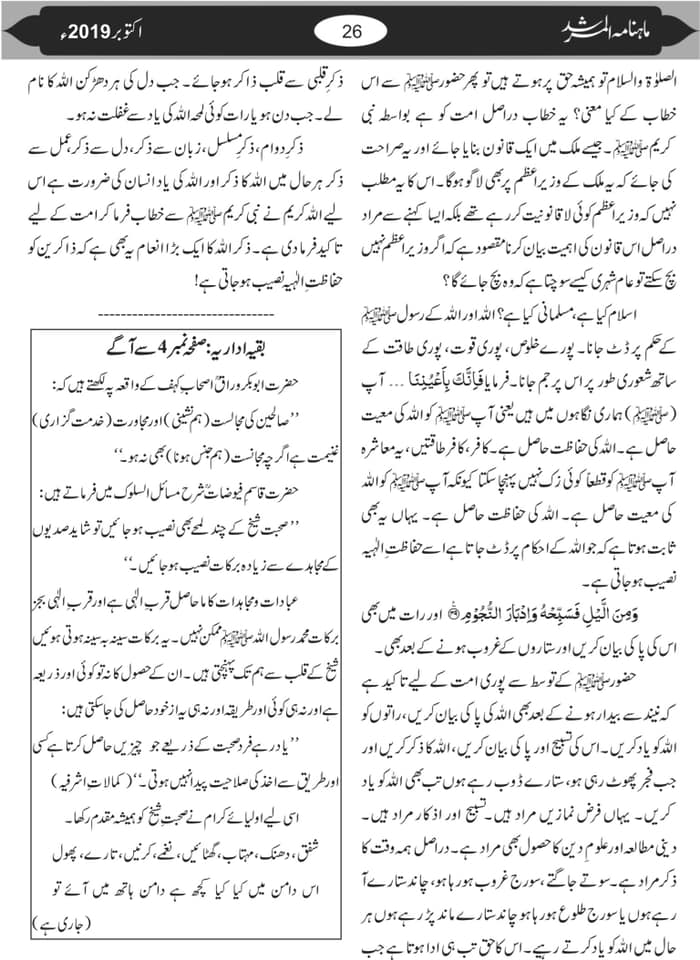